Thanks in no small part to the weight of public opinion behind the Make Poverty History campaign and Live8, the international community listened and acted. World leaders at Gleneagles agreed to double aid, write off debts, train peacekeepers, help poor countries to achieve free universal primary education and access to basic health care, make AIDS drugs available to all, and tackle the problem of climate change.

It was a remarkable result in which millions of people can take pride. But that was, we accept, just the first stage. These fine words will mean nothing without delivery on these commitments and real change for millions of the poorest people on our planet.

No one expected, of course, that overnight we could make poverty history or reverse climate change. These are long-term problems and the solutions will be long-term too. But the millions who campaigned in the run up to the G8 have every right to expect immediate action to start to put things right. With the G8 due to meet again in St Petersburg, what progress has there been in the last year?

To mark the first anniversary of Gleneagles, we are publishing a short booklet that shows you what we believe has happened so far. It shows there has been a great deal of progress in many areas but does not shy away from the disappointments, particularly the failure to reach a global trade deal.

We know that some question why debt relief is included in aid budgets. Firstly, these are OECD rules – not ours. But also debt relief, by freeing up funds for poverty reduction, is one of the best ways of bringing about immediate change. It has already enabled Tanzania to abolish fees for primary school so that all children, and 100 per cent debt cancellation is allowing Zambia to scrap charges for health care.

So what matters is that debt relief is used properly by governments that receive it and that there are more funds, overall, for development. This is what the G8’s pledges will achieve. The UK will meet its target to provide 0.7% of national income as aid by 2013, two years ahead of EU target of 2015. We have already met our target to provide £1 billion a year in aid to Africa and we are increasing steadily to reach £1.25 billion by 2007/08.

As a concrete example of what this achieves, the UK has committed to spend £8.5 billion in aid for education over the next 10 years – our share of the extra money the world needs to educate the 100 million children who do not go to school and achieve education for all by 2015. Twenty-two African countries are already preparing 10-year education plans. We will continue to press other donors to join us in committing their share of the money needed to implement these plans.

For $10 billion a year every child in every continent could have teachers, books and classrooms. That's only £7.50 a year, or 15 pence a week, for each of us in the richest countries. Indeed for just two pence a day each, we could finance schooling for every child denied it today in the poorest countries. And education benefits not just children, but families, communities, and whole countries – it is the single greatest investment we can make to ensure growth and economic development. It improves job chances and prosperity; promotes health and prevents disease.

Education is at the centre of any successful strategy to turn back the tide of HIV and AIDS. Simply keeping girls in school is one of the most effective HIV prevention strategies. For instance, infection rates among educated women in Zambia have declined, while remaining constant among those who have not received basic education. And just as improved education is vital to tackling HIV and AIDS, a co-ordinated response can improve a country’s capacity to educate its children. Put simply, implementation of an effective AIDS strategy is critical if a country wants to avert a devastating loss of teachers.

Nearly $4 billion was committed in 2005 to replenish the Global Fund to fight AIDS, TB and malaria. A special session of the UN earlier this month agreed to fund fully all countries who put together credible, sustainable AIDS plans, as part of fulfilling the Gleneagles promise of universal access to AIDS treatment by 2010.

This will require a mammoth effort because the UN itself estimates at least $20 billion a year will be needed by 2010 to provide drugs, to put in place effective prevention programmes and provide care and support for those affected including children left orphaned. But it shows how Gleneagles and the unprecedented public campaigns for change has raised global ambitions.

The UK and Europe are showing the way. Britain is the 2nd largest funder of AIDS programmes and we have committed to provide £1.5 billion between 2005 and 2008. Along with other European countries, we have launched the International Finance Facility for Immunisation, which will save five million children from death between now and 2015. The first bonds will be issued soon.

We have launched a new UN Emergency Fund to respond more quickly to natural and human disasters, like Darfur and the Pakistan earthquake. And we have ratified the UN convention on corruption.

So there is plenty in which to take pride. But, of course, there is more that we need to do. Trade is the one key element of the 2005 agenda where we have failed to make the progress we hoped. In some areas, we have inched slowly towards a global deal but we have not yet dealt with the most difficult issues, and the deadline to conclude the round – by the end of this year – is fast approaching.

Living up to the promise of this ‘Development Round’ of talks is the single biggest decision we could make internationally to lift millions out of poverty. From conversations we have recently with leaders including President Mbeki, President Bush, Chancellor Merkel and President Lula, we know there is a widespread desire for an ambitious deal to benefit the poorest countries. What we need is the courage and imagination to remove the obstacles to it.

And then there is the challenge of conflicts like Darfur. Last month a peace agreement was agreed in Abuja. We need to use it and the new UN Resolution to put pressure on all the different parties to stop the fighting and allow for a smooth handover to the UN when it takes over from the African Union later this year.

In the meantime we need to do more to strengthen the African Union’s mission in Darfur. The Gleneagles commitment to support the African Union to establish a standby force for peacekeeping is a vital step towards a more effective African response to conflicts like this.

We know on tackling climate change as well that there is frustration over speed of progress. The science tells us we don’t have much time. Although the UK is going to meet its Kyoto target seven years ahead of time, we need to agree as soon as possible what happens after the first phase of Kyoto ends in 2012. The UK’s work throughout 2005 was about securing agreement by all countries, even those who have refused to ratify Kyoto, to begin to discuss a future international framework. This was a very important breakthrough that then allowed significant progress at the UN meeting in Montreal.

We also agreed the Gleneagles Plan of Action to increase developing country access to clean technology and help them adapt to climate change. This year and next, we need to accelerate our discussions, to avert dangerous climate change and agree a maximum limit for carbon dioxide in the world's atmosphere.

We are sure that there will be some who would like to have seen more progress while others will question our assessment about what has happened over the last year. We welcome this. For just as public opinion played a huge role in ensuring we did not miss the historic opportunity to agree major steps towards making poverty history in our world, so it must also ensure the international community delivers on its promises. Together we can make sure we don’t fail the poorest on our planet. 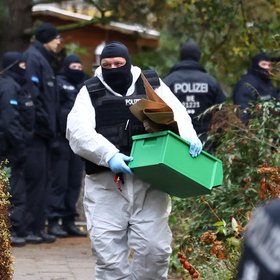